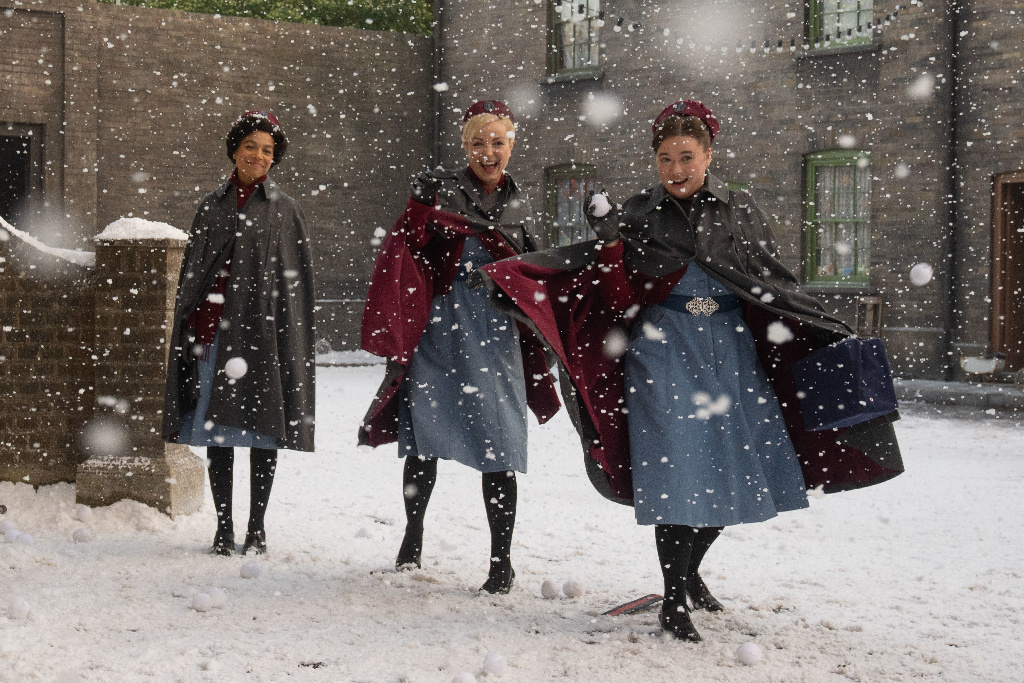 We have everything you need to get into the holiday spirit.  Watch special shows, get delicious recipe ideas, and plan fun activities to do with your kids and entertain your guests.

Join Lucy Worsley on a 12-day extravaganza as she discovers that much of what we enjoy in contemporary Christmas — from carols to gift-giving, feasting, and drinking — was just as popular 500 years ago, with some surprising Tudor twists.

Ceramic artist Susan Garson utilizes hand building along with her skills as a painter to create functional objects in clay. Garson demonstrates how to build your own menorah to celebrate the Jewish holiday

All Creatures Great and Small on Masterpiece – The Perfect Christmas

James and Helen question their future together as Christmas approaches, while things look grave for one of Darrowby’s most beloved animals.

Stories from the Stage – Holiday Spirit

Stories from the Stage – The Perfect Gift

It is often said that it is better to give than to receive. But no matter which side of the transaction we’re on, gifts – tangible or not – have the power to simply bring a smile or even save a life. Christine Gentry donates a kidney to a stranger; Stacey Bader Curry dreams of one gift but gets another; and on the night of her first big high school dance, Mary D’Alba gets an amazing gift from her dad.

Ella Wishes You a Swinging Christmas with Vanessa Williams

Spirit of Christmas with Kevin Pauls and Friends

Stars Megan Hilty and Neal McDonough join The Tabernacle Choir at Temple Square to celebrate the holidays with a return to the Emerald Isle. McDonough and Hilty, who each share Irish heritage and traditions, deliver a deeply personal program that weaves together well-known holiday tunes, classic Christmas carols, and hymns with some traditional Irish musical numbers.

While the celebrations of Christmas are universal, local traditions helped set an already unique city apart. Canal Street and Mr. Bingle, the decorated Centanni Home, bonfires along the Mississippi River levees, and a semi-tropical city under a rare blanket of snow – all part of Christmas in New Orleans.

All is Calm: The Christmas Truce of 1914

The Western Front, Christmas, 1914. Out of the violence a silence, then a song. A German soldier steps into No Man’s Land singing “Stille Nacht.” Thus, begins an extraordinary night of camaraderie, music, and peace. A remarkable true story told in the words and songs of the men who lived it.

How to Cook Well at Christmas with Rory O’Connell

All is Bright! A Concordia Christmas

Experience the St. Olaf Christmas Festival, one of the oldest musical celebrations of Christmas in the United States. Led by five conductors, it features more than 500 student musicians who are members of the college’s world-renowned choirs and orchestra. The festival features a rich repertoire of classic Advent and Christmas compositions, familiar carols, global hymns, and contemporary pieces.

Buttons: A Christmas Tale is a magical, musical story that shows believing can be the greatest gift of all. Follow the heartwarming journey of two orphan girls whose only wish is to find a home for Christmas. With a little help from their guardian angels (screen legends Dick Van Dyke and Angela Lansbury), they discover that miracles really can happen when you find the power to believe. From director Tim Janis, this inspiring holiday film for the whole family features an all-star cast including Jane Seymour, Roma Downey, and Abigail Spencer, and is narrated by Kate Winslet and Robert Redford, with a special song by Sir Paul McCartney.

The Nutcracker and the Mouse King

It’s December 1967, and life in Poplar is returning to normal after the terrible train crash. The midwives move the maternity clinic into new premises and are delighted when one of their first patients through the door is Rhoda Mullocks, whom the team knows well. Rhoda is heavily pregnant, and understandably nervous after her last baby was born with limbs that have been affected by Thalidomide. Elsewhere, Fred decides that Poplar needs to come together to raise money for those families still affected by the train crash and pitches the wonderful idea of a festive talent show.
Note: Previous years’ Midwife holiday specials will air on December 25th starting at 12:30 pm